This 1,5 days workshop, which took place at the end of September 2017 in Salzburg, was organized as a follow-up event of the winter school 2017 held in St. Wolfgang. Around 20 participants, mainly from the Doctoral College “GIScience” and the PhD study programme “Applied Geoinformatics” worked on four different topics such as “Big earth data”, “VGI & Social media for urban context”, “Big trajectories” and “Uncertainty in big geospatial sensor data”.

The idea of the workshop was that each group shall have a clear plan with milestones to develop the research topic / idea of the winter school further via a mini-conference, a final conference and a paper. 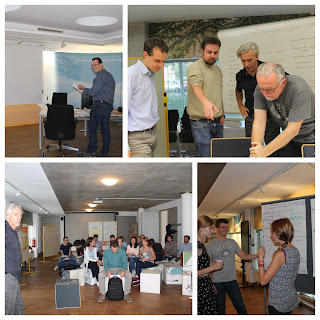 The results were presented in a form of a poster and a 5 minutes elevator pitch where all group members were involved. Jury members, consisting of faculty members and young scientists, gave critical feedback and helped the groups to narrow down the topics and to improve the concept.

Although the schedule was very tight during these 1,5 days it was a fantastic and inspiring atmosphere which again strengthened the team spirit.
Eingestellt von Erika Blaschke um 10:14 AM

Email ThisBlogThis!Share to TwitterShare to FacebookShare to Pinterest
Labels: DK