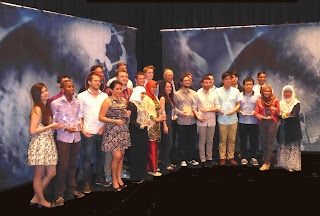 At the annual ESRI conference in San Diego, 'Applied Geoinformatics' MSc student Christoph Mayrhofer represented Austria as a recipient of the 'Young Scholar Award' among a select group of distinguished young researchers from around the world. His work on 'Autocorrelation - based Regioclassification' was showcased to a huge audience, generating the opportunity to interact with fellow young scientists and the global geospatial research community. 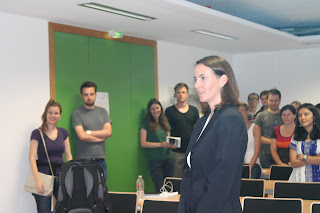 Yesterday Eva Haslauer defended her PhD Thesis, entitled “GIS-based backcasting: An innovative method for parameterization of sustainable spatial planning and resource management”. Prof. Dr. Thomas Blaschke acted as the chair of the examination committee. The three discussants were: Dr. Gudrun Wallentin from the University of Salzburg, Dr. Peter Mandl  from University of Carinthia and Dr. Norbert Bartelme from the University of Graz.

During her PhD studies at the Department of Geoinformatics  at the University of Salzburg Eva was employed at the Research Studio iSpace. In her PhD work, Eva developed a GIS-based, spatially explicit backcasting model. This novel approach was implemented with the programming language Python and applied to a case study of urban sprawl in the province of Salzburg. The results of the model yield back-casting of land use classes from a future state back to the present, in 8 year time steps. This can be utilized to counteract urban sprawl and its negative consequences by supporting spatial planners to derive long-term strategies for sustainable spatial developments in the case study area.

We wish Eva all the best for her future career!
Eingestellt von Erika Blaschke um 1:25 PM No comments:

The Austrian Academy of Sciences (ÖAW) is inviting nominations for this year's Waldo-Tobler Prize, which has been established through the ÖAW Commission for GIScience!


This distinguished prize recognizes the work of Professor Waldo Tobler, who introduced innovative methods based on digital technologies into geographic research since the 1960s, with an emphasis on theory, mathematical modeling and dynamic visualization. Since 1982, Prof. Tobler has been a member of the US National Academy of Sciences. Well known through his extensive publication record, he formulated the "First Law of Geography" in 1970 with the phrase “everything is related to everything else, but near things are more related than distant things" which inter alia justifies analysis of spatial dependencies, metrics for spatial autocorrelation and spatial organisation in general.

Nomination letters for the Waldo Tobler GIScience Prize shall be sent to application@oeaw.ac.at no later than August 31, 2015. Candidates shall be introduced with a cover letter justifying the nomination, a full scientific CV and list of publications.

The prize will be awarded to an individual who has made outstanding and sustained contributions to the discipline worthy of inspiring young scientists in Geoinformatics or Geographic Information Science, and has accomplished significant advances in these fields. Qualifications should ideally include achievements in research as well as in education.

>>> Complementing this prize for scientists with outstanding stature within the Geoinformatics and Geographic Information Science communities, the ÖAW Commission for GIScience is announcing a top paper competition as the Young Researcher Award in GIScience.