The GeoServices-4-Sustainability (GeoS4S) project consortium consisting of 10 universities from Europe, China and Thailand conducted International Summer School-2 (ISS-2) at the School of Geography, Nanjing Normal University (NJNU), Nanjing, China from March 5 to 16, 2018. It also included a Dissemination Conference on 10-11 March.

The GeoS4S-ISS-2 was designed to enhance geospatial competences of postgraduate students and junior faculty from all the project partners. It attracted 49 participants from 17 different nationalities studying / working at the partner universities in Europe, China and Thailand. The consortium taught 10 modules during these 2 weeks, with about 10 participants attending each module. The teachers from the consortium universities taught the concepts and methods of the modules they had developed and trained the participants in implementing those concepts and methods using geospatial data and GIS software.

The consortium had conducted GeoS4S-ISS-1 at the Asian Institute of Technology (AIT), Thailand in May-June 2017 and GeoS4S-ISS-3 will be organised at University of Sustainable Development, Eberswalde, Germany in July 2018. The GeoS4S project will conclude with Dissemination Conference-2 to be held in Bangkok, Thailand in September, 2018.

The Interfaculty Department of Geoinformatics-Z_GIS of the University ofSalzburg, Austria serves as project coordinator assisted by co-funding from the European Commission under the Erasmus+ Key Action 2 CBHE (Capacity Building in Higher Education) from October 2015 to October 2018.

Willi Mann successfully defended his PhD Thesis “Efficient Techniques for Set Similarity Join Queries”. While being a student at the Department of Computer Science Willi was associated with the Doctoral College “GIScience” at Z_GIS. 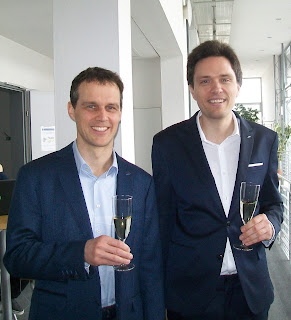 The DK GIScience has profited from this in-depth research in database science. In particular the focus is to efficiently store and query very large volumes of data. The combination of database research and Geoinformatics will provide  a deeper understanding of fundamental problems in bridging the gap between database systems and GIS software.

We wish Willi all the best for his future career and endeavours!
Eingestellt von Erika Blaschke um 2:39 PM No comments:

Again at this time of the year we are proud to present Z_GIS' annual report, please get your online copy at >https://www.flipsnack.com/DeptGeoinformaticsZGIS/z_gis-annual-report-2017.html

This brochure introduces our new research projects, documents progress in study programs and outputs from our conferences in 2017. Enjoy reading - and we're glad to hear your comments and inputs!

How to improve water management by using space technology

This issue was addressed by the 4th International Conference on the Use of Space Technology for Water Management, which recently took place in Islamabad, Pakistan. More than 100 experts from all over the world discussed cutting-edge tools and findings to better understand, describe and quantify water-related issues using space technology. The conference was organised by the the United Nations Office for Outer Space Affairs, the National Space Agency of Pakistan SUPARCO on behalf of the Government of Pakistan, and the Prince Sultan Bin Abdulaziz International Prize for Water.

The range of applications covered the entire water cycle - extending from precipitation estimation from satellite data to glacier mapping, run-off estimation, erosion and water quality assessment, evapotranspiration calculation and beyond.

In his keynote presentation within the session on case-studies, Lorenz Wendt (Z_GIS) gave insight into the lessons learned by Z_GIS from developing water-related information products and services and providing those to humanitarian actors within the EO4HumEn+ project.

The key to success in many water-related applications of space technology is the integration of remote sensing data with information collected in situ, by experts or measurement systems on the ground, which is both a technical and an organisational challenge. No the less, space technology bears a great potential to tackle the many water-related challenges the world is facing.