Martin Sudmanns, Hannah Augustin, Christian Werner, Stefan Zimmer and Gina Schwendemann are the winners of the first Open Data Copernicus Hackathon. At the two-day event, which took place in Vienna at the beginning of November, the Z_GIS team designed the "sharecropper app" and developed it as a prototype. 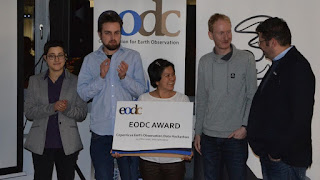 The sharecropper app maps land cover changes detected using Copernicus Sentinel-2 images based on known farmland parcels. These changes are combined with crowd-sourced and open data related to land ownership and land use, creating a global inventory about the type and magnitude of changes.
At the Hackathon nine international project teams - scientists, developers and data experts - designed applications in the fields of humanitarian action and human security. The Z_GIS team is one of two winners of the event, which was organized by the business incubator INiTS and financially supported by the Austrian Ministry for Transport, Innovation and Technology (bmvit) and the Austrian Research Promotion Agency (FFG).
Z_GIS has been developing Earth-observation (EO) based solutions for the humanitarian sector for several years.