Kids presented YouthMap5020 at the EUC in Salzburg 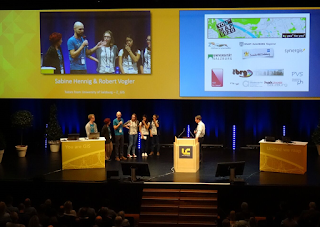 They were the youngest speakers at the 2015 ESRI European User Conference: four young people presenting the YouthMap5020 to the audience. And they did a great job in showing their own achievements.
Hundreds of young people had contributed to the map. It includes special information for young people such as skate parks, chill out places and much more. Also on stage: project leaders Sabine Hennig and Robert Vogler (both Z_GIS), who had initiated the project in 2013.