On 9 September 2019, the consortium of the FFG-ASAP project Sen2Cube.at held a user requirements meeting at ZAMG premises in Vienna and presented the first prototype of an operational Sentinel-2 semantic Earth observation (EO) data cube Austria.

During the meeting, the academic partner (University of Salzburg, Department of Geoinformatics - Z_GIS) and the university spin-off Spatial Services GmbH presented the newly developed prototype to the project partners AMA (Agrarmarkt Austria) and ZAMG (Zentralanstalt für Meteorologie und Geodynamik). In the afternoon session, the meeting was open to a wider audience and other interested users.

The presented prototype is the worldwide first semantic EO data cube for Copernicus Sentinel-2 mission data. It provides new and innovative features, including semantic content-based image retrieval and image analysis of all captured Sentinel-2 data through space and time in user-selected areas of interest (AOI) and user selected time intervals.
A semantic EO data cube was defined as a spatio-temporal data cube containing EO data, where for each observation at least one nominal (i.e., categorical) interpretation is available and can be queried in the same instance (see Augustin et al, 2019).

This approach allows human users to query and analyse EO data on a higher semantic level (i.e. based on at least basic land cover units and encoded ontologies) directly in the data cube. A unique Web-interface allows interactive human-like queries based on spatio-temporal and semantic relationships. The requirements of different target user groups are met by explicitly specifying spatio-temporal models as semantic queries and storing & sharing them in a knowledge base. The semantic queries are translated by an inference engine into data cube queries and executed on-the-fly on the server-side against the data cube, where the new information is inferred. Results depend on the semantic query and include (1) analysis maps for online use or as download option for integration in any GIS, (2) time series curves for aggregated results per AOI, or (3) the selection Sentinel-2 data sets that match user-defined criteria for downloading and further analysis

The semantic EO data cube is generic, meaning it is useful for multiple thematic domains. Its potential is demonstrated in the Sen2Cube.at project by developing different services in a proof-of-concept environment for Austria.

Already implemented services include:
*Semantic content-based image retrieval, e.g. for cloud-free image retrieval based on user-defined AOIs instead of image wide statistics, which is not possible in any other Sentinel-2 image database worldwide.
*Spatio-temporal analysis through time analysing the semantic categories through time for any user-defined AOI and/or time span.
A

In the second half of the project more services are developed. They will allow the generation of cloud-free mosaics for user-specified time intervals and the development of a mobile App for location-based queries through time. The prototype will be scaled up to the entire country of Austria, covering all available Sentinel-2 images since the launch of Sentinel-2A in 2015. The semantic EO data cube is implemented at EODC infrastructure; since July 2019, Z_GIS is also an associated partner of the EODC.


The Web-interface prototype serves as graphical inference engine and allows interactive human-like queries based on spatio-temporal and semantic relationships. Requirements of different user groups can be met by explicitly specifying and sharing spatio-temporal models in a knowledge base (here: analysis of water occurrence through time) 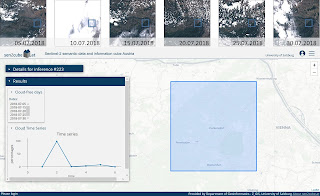 Semantic content-based image retrieval in user defined areas and user defined time intervals covering all available Sentinel-2 data within Austria, here: cloud-free image retrieval for a user selected AOI for July 2018 (image IDs of cloud free images are returned and a statistic of the cloud cover of the AOI for all analysed images).