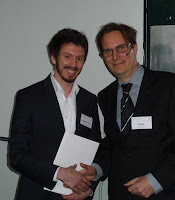 Doctoral college graduate Michael Hagenlocher is the winner of this year´s "Förderpreis Geoinformatik" in the PhD category, which is awarded annually at the 'Münchner GI-Runde' conference to honour outstanding research in GIScience. Michael is continuing a tradition of several earlier awardees from the University of Salzburg´s Z_GIS. Congratulations!

Michael has successfully defended his thesis on 'Integrated spatial indicators for modeling, exploring and visualizing vulnerability to vector-borne diseases' in December 2014, focusing on malaria and dengue fever in South America and Eastern Africa. In his research Michael developed concepts and methods for the spatial assessment of social vulnerability and risk in the context of vector-borne diseases, including web-based tools for the interactive visualization of both hotspots and underlying drivers of risk and vulnerability that can support spatially targeted interventions.

Since July 2015 Michael is a Research Associate at the United Nations University - Institute for Environment and Human Security (UNU-EHS) in Bonn, Germany.