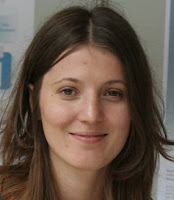 The University of Salzburg – Centre for Geoinformatics EDC is proud to announce Mariana BELGIU as the 2009 recipient of the EDC (ESRI Development Center) Student of the Year Award. She has been chosen as the top Salzburg EDC student for 2009 due to her outstanding achievements and contributions:

Mariana started the year as a master’s student finalizing her thesis on “Making Geographic Resources Discoverable – an Approach towards a Streamlined Metadata Generation Process”. In this thesis she was working towards a prototype implementation of an Austrian national metadata profile within the framework of applicable standards. This successful implementation is based on the GPT (GIS Portal Toolkit). After achieving excellent grades on her thesis and final exam, she moved on to developing and successfully presenting a PhD proposal with a focus on the role of ontologies as a basis for semantic search within SDI’s and portals. After acceptance of this proposal she currently is in the initial stages of her PhD work.

In addition Mariana volunteered contributions to the development of a demonstrator for a Central Asia SDI in cooperation with Kyrgyz universities. This project has been recognized through grants from GSDI and ESRI. Mariana assisted with building demonstrator SDI components and involved herself in the education and training of local actors.